First, the technology works generally as follows: you install an application on your machine that will send some “data” from your machine to “you”. Let’s define data a bit more precisely.

Tools like VNC work along those lines. They take a very simple approach to this problem. They send your keystrokes and mouse movements to your machine and send you back the results. The problem though is that the output is rarely smooth and not necessarily very optimal.

The next approach to sending data is the gotomypc approach. Instead of just taking a copy of what is your screen, they hook in to your operating system and try to understand what is it you are about to display. For example, if I want to tell you to write all the numbers from 1 to 100, is it easier to say: “write 1,2,3,4,5,… 100” or is it easier and shorter to say "write all numbers between 1 to 100”? Clearly the second approach is smarter, but it requires more effort. You know have to understand what is really going on under the hood of the computer and have to relay this information to the other side which also has to be intelligent enough to decode it right. For example, in my problem, do you know if 100 is in or out? If I give you the whole list, it’s clear it’s in, but if I saw “between 1 to 100”, you might think we start at 2 and finish at 99.

Programs like gotomypc include also Remote Desktop, which comes for free with Windows. One of my favorite is Microsoft Live Mesh, which allows you to do that and much more.

But, if remote desktop is free, why pay for a tool like gotomypc?

Two big reasons, convenience and practicality. First, tools like gotomypc can be run from many different places, namely:

When you connect to your PC, the Viewer window launches automatically, allowing you to view and control your PC from another Microsoft® Windows®, Microsoft® Windows® CE, Macintosh®, Linux, Unix® or Solaris® computer. No pre-loaded software required.

Also, for practicality, you don’t have to worry about firewall settings and dynamic DNS settings. Gotomypc does that for you (among the reason, because it will act as a middle man between your home and your remote machine.

But before you pay for such a tool, you should check out some of the free alternatives and see if they can do a good job for you.

So having said all that, what do I think of the risk to employers? In reality, I think tools like GoToMyPC are actually safer than the alternatives. By using a tool like GoToMyPC, you are typically putting a wall between your network and the remote network. Contrast this with the alternative. If a person likes to download illegal music, where would you rather see that person do that? On his local machine or on his home machine with GoToMyPC acting as a middle man? Or, the employee might bring his personal laptop and hook it up to the corporate network. Or worse, might use a VPN connection and potentially create a bridge between the corporate network and some other unsafe network.

Now it’s true that an employer could try to lock down all the avenues, but the reality is that when confronted with this situation, it’s possible employees will do worse things to circumvent this situation. For example, wireless usb keys (that connect to cellular service) are becoming more prevalent. All it will take is an employee connecting such a key in his laptop to circumvent some network limitation, and voila, you potentially have opened up the door to all sorts of malware transiting through that laptop when it’s connected both to the corporate network and the wireless network.

So for all these reason, a tool like GoToMyPC might actually be better for a corporation than a number of those alternatives.

In my previous blog entry I was discussing three things I didn’t like about my Zune. Let me now go to the next one, namely the wireless portion.

When I purchased my Zune, that was THE feature I was looking for. I thought that connecting my player to retrieve my podcast was a thing of the past. I think that I was clearly mistaken.

First, as an aside, you need to connect your Zune to recharge it. Clearly, the likelihood of a doing at the same time is greatly increased, especially if it’s your laptop you are connecting to.

But besides that, I encountered a few problems. Wireless syncing is really configured by doing a triple pairing: you zune, one computer and one wireless setting. My laptop moves around. I am not always connected to the same wireless network. To make things worse, the wireless connection at my university was not supported because of the authentication model used there (web page or WPA2 with domain authentication). So wireless syncing at my university was not an option. At home, it would not always work. Often my computer was not detected. And when it did work, speed was horrible. While wireless syncing might work for small deltas, if the goal is to receive 100 meg of podcast, even over 802.11g, it takes a LONG time. Much longer than say looking for my USB cable, hooking up my Zune and syncing. And connecting my USB cable was more likely to work. So for all there reason, I ended up not using that feature.

I think if Microsoft wants the wireless to really work, they should allow you to sync to your library through the internet. This would be similar to the kind of technology Orb supports. Your files are accessible through the web (even though they are stored at home). And you can access them from anywhere. This would make wireless syncing useful.

(and on a side note, if you have never tried Orb, you should do it now! It allows you to see your music, video and picture media from just about everywhere)

Stay tuned for part 3 of this Zune series

Believe it or not, I moved from a Creative Muvo TX FM 256 Meg to a Microsoft Zune 8gb player only in…. 2008! No iPods, no Creative Zens or Sensa players in between. The jump was relatively brutal, and definitely good.

Before I go to my evaluation of the Zune, let me just state how I was using my MP3 player. I would use my Muvo to listen mostly to podcasts. The Muvo was great in this department, particularly because it could play only one track at a time, and not go to the next song. Fast forwarding was exponential (slow at first, then would get faster), and the Muvo would retain my position if I turned it off. Finally, batteries were easy to swap out (so I always had a spare AAA battery) and the player was really small.

Last year, my friend convinced me to get a Zune. One feature that really pushed me to get one was the wireless syncing. I thought that, with my podcasts, it would be a feature I would always use, since new podcasts were released every day.

So what’s the verdict? I can’t live without my Zune, but I certainly wouldn’t mind a Zune player that really got the job done. Here is a list of things I really hate about the Zune, some of which are not necessarily the Zune’s fault, but are certainly annoying.

I think there are few things I hate more than my Zune crashing (more than that, there would be Vista crashing and my car crashing). I’m not sure if iPods crash as often, but it sure is annoying. At the very least, maybe Microsoft should regularly save what you were listening to so that upon resuming, the player would start back at the same spot. Even would be not to crash, but that might asking for too much.

This happened to me too many times (at least twice). I connect my Zune to my computer and the Zune software thinks it’s a new player it has never seen. I then have to waste tons of time resynchronizing my player and reconfiguring all my podcasts settings (how many to keep in my player, etc.). Part of this seems to come from the fact that the Zune (like an iPod) is a one way street, where data goes in but never seems to really come out.

This was the thing I dreaded the most. With my Muvo, I could connect my player to any computer without the need for a cable. It was very convenient. With the Zune, you need a cable. Now granted, all MP3 players of this type require a cable, so the problem isn’t just with the Zune. But here was the second problem. The Zune cable is proprietary. Which means it’s worth as much as my Zune if I lose it. No cable? No Zune. I’m not sure why, but Microsoft should have found a way to use the same connector as the iPod, which would have given me access to dozens of peripherals and more competitive pricing. Microsoft has always made compatibility a priority, I am not sure why they didn’t embrace the iPod connector, even with the potential lawsuit attached to it.

Did you forget that dot after the Ibid?

We often forget dots (.) after common words, like Ibid. How can we search a word document easily to see where we have missed that trailing dot? 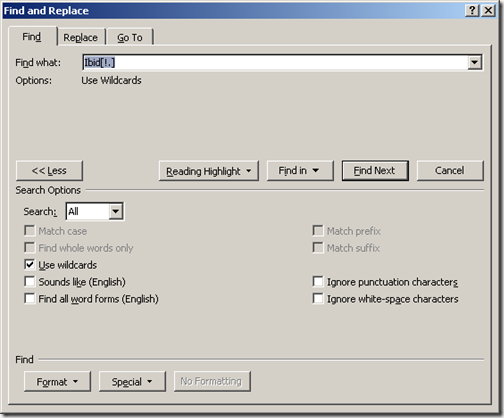 Internet Explorer 8 locking you down?

Sometimes, a website creates Internet Explorer windows where they disable all menus, all right-click menus, etc. And sometimes you really want to understand what the html source for a particular page is.

Quick tip: To access the debug screen, just press F12. At least you will be able to see the source of the site and maybe understand what is it that the website is trying to hide from you.

This could be interesting when you are trying to retrieve the real link for an object on the page, for example the URL of a picture. 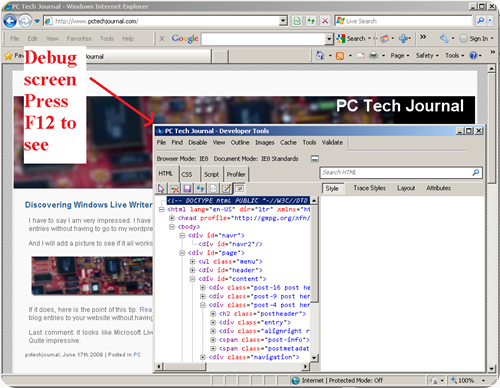